RSS
← The National Curriculum is Evolving

What exactly are you scared of? 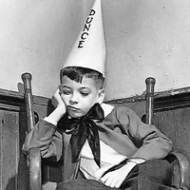 On Monday morning I was enjoying my porridge and watching my old favourites, Bill and Susanna on BBC breakfast (I really do love Bill and Susanna), when they mentioned that the new National Curriculum for 2014 had been released, and shock horror, the topic of evolution was to be introduced at primary age for the first time. “Hoorah!” I exclaimed out loud, despite being by myself. But when I rushed to the computer to find the updated curriculum I was less than impressed.

You may remember my previous post, about the suggested changes that were drafted back in June last year. This version of the national curriculum proposed that year 4 (8-9 years old) pupils would be expected to understand the basics of inheritance – without necessarily understanding genes and chromosomes – and the key concepts of adaptation through learning the evolutionary history of our hominid ancestors over millions of years, and years 5 and 6 would be introduced to variation, and evidence supporting evolution from the fossil records.

I was very keen for these proposed changes, I liked the idea that children in year 4 would be taught about inheritance, an absolutely fundamental topic in biology. I also liked that the curriculum hadn’t shied away from the idea of human evolutionary history. For a child I expect it’s probably the easiest example to comprehend, yet the most controversial for any evolution sceptic. But importantly, these changes seemed to promote evolution, from an “aside-note” within the field of biological sciences, to a foundation of the biological sciences, which helps to unite and understand all aspects of biology.

So what does the edited version of this new curriculum propose? All mention of evolution and inheritance has been removed from years 4 and 5, and the short mention that still exists in year 6 states (and I quote):

“Pupils should be taught to:

It is the little may they have decided to add in the final point that I find so infuriating. I went back and checked, it was not in the previous version, so why include it? Is it because you truly believe there is some doubt in the matter, or is it because you’re scared someone might dare to question? And what if a child does question you? Fantastic! Surely that is what education is about, getting children thinking, asking, debating about the world they live in.

The problem is, small words such as these suggest that there is a meaningful debate still going on. There isn’t. The debate is fuelled by the media, and never within scientific communities – we have moved on. We are preserving this phantom debate for future generations because we are apparently scared to tell the truth. I finished my last post on the matter with, “Well done Britain, I’m proud of you”, but now I’m left feeling remarkably underwhelmed. It seems as though our step in the right direction has becoming a half-arsed shrug.

← The National Curriculum is Evolving

2 responses to “What exactly are you scared of?”